minh posted Sep 30 '17 at 11:16 am
Dragon Curve
Can someone show me how I can make a dragon curve in this program? I'm new and I can't figure out how you can do something like this. If it is not possible to do this, can you show me another program that may help?

physicist posted Apr 19 '17 at 1:03 am
How to get the window's dimensions in fractal coordinates, not pixels
It's been so long that I've done any UF programming that I've forgotten how to get the window boundary values in fractal coordinates, assuming that there's no skew. I remember that #ctr gives the center. And there's some stuff about the width to height ratio being over or under 4:3.

jam posted Aug 7 '17 at 4:34 pm
Modifying Fractal Formulas
Greetings. Back in the days of the old mailing list, there were so many discussions about what it took to make a fractal image one's own, but not nearly so much discussion relating to modifications of fractal formulas in UFM files. Most of us have modified z = z^2 + c many times without a thought, but what about other fractal formulas? Many of us have been asked for permission to modify our fo
read more
read more
2replies
147views
recent by Frederik Slijkerman  ·  Aug 24 '17 at 9:46 am

KathyR posted Aug 5 '17 at 8:27 pm
Catseye Fractal
I am an avid fan of XaoS and it has a very unique fractal called Catseye. There isn't much documentation on it, I don't know where it came from, and I have no idea what the actual formula looks like. Perhaps it can be uncovered somewhere on GitHub? It has some incredible potential when varying the bailout value and the different fractal planes. Here are some designs I worked up mostly in Juli 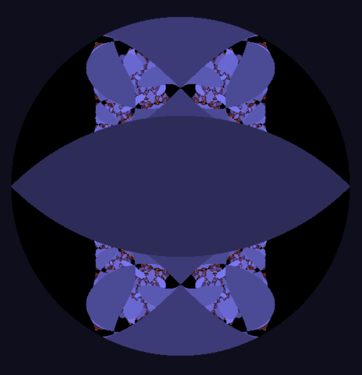 physicist posted May 13 '17 at 3:37 pm
Inverse of PixelCoordinate?
PixelCoordinate, a UtilityTransform, takes as argument a fractal coordinate z and returns the corresponding pixel coordinate.

Is there a similar transform that takes as argument a pixel coordinate and returns the corresponding fractal coordinate?

If not, I could write one.

physicist posted May 18 '17 at 1:42 am
Param settings can't use another param value?
I'd like to do the following in the default section:

int param p1
; stuff
endparam
int param p2
min = 1
max = @p1
endparam
but UF6 won't let me use @p1 here. Is there any way around this other than checking in the Init section?

Otto Magus posted Apr 20 '17 at 4:02 pm
Can't Access Public Formulas
Is anyone else unable to access the public formulas, either browse or recent changes or logging in as an author?

I am able to update my formulas successfully in UF, but cannot upload some new formulas I have written.

I get this message:

followed by (for browsing collection):

There is a problem with the request. Please contact the owner of the site

fractalwizz posted Apr 16 '17 at 11:30 am
Access Minimum Iterations
The past week or so, I've been developing a new coloring algorithm. The basic idea was to use the minimum iteration of the image to help determine how the image was colored.

I have been using Fractal Explorer [now defunct, and I'm kicking myself fro not buying a license to the source years ago when the Russian dude was still responding to e-mail] and I have many [probably about 1k] original fractal formulae that are stuck in that format.

I still have the app, but it only works on 32 bit systems, and I only have one 32 bit computer left.

jam posted Dec 6 '16 at 3:13 am
Formula Upload
Over the last few months I have created a file of unique Newton, Halley, and Householder method formulas, and would like to upload them to the public database. Rather than include them with my previously existing formula files, since there are so many entires I would like to create a jam-Newton.ufm file or something like that. Who do I contact these days about creating a new formula file for th
read more
read more
3replies
142views
recent by jam  ·  Dec 9 '16 at 1:37 pm

When writing a coloring algorithm, is there a way to set repeat gradient as unchecked by default? I've tried 'repeatgradient=0' and similar, but no luck yet.....

EvrWccn posted Oct 8 '16 at 1:44 am
Need help converting a formula to something usable in UF
This is a formula I found initially through a program for the iPad called Frax...
They use a Line Average coloring algorithm... I googled it and found this.
I have no clue how to program it into UF, so I was hoping to find someone here that did know how...

Otto Magus posted Aug 6 '16 at 1:29 pm
Bailout question.
Hi.
is it possible to provide the option of alternative bailouts in the same formula?

More specifically, I wanted to include convergent and divergent bailouts:
|z|<@bailout (default 4.0)
|z|>@bailout (default 0.001)
It seems only one expression is allowed in the bailout section. Is there a way to do this? Any help would be appreciated.