since some people were wondering how I made some of my images, I decided to write a short tutorial on how to use the coupling loops formula in phs.ufm which I used several times over the last months.

When you first open it, this is what it looks like. The loopy stuff is located in the valleys of the main set and also the minibrots. As a rule of thumb, the higher c is, the stronger 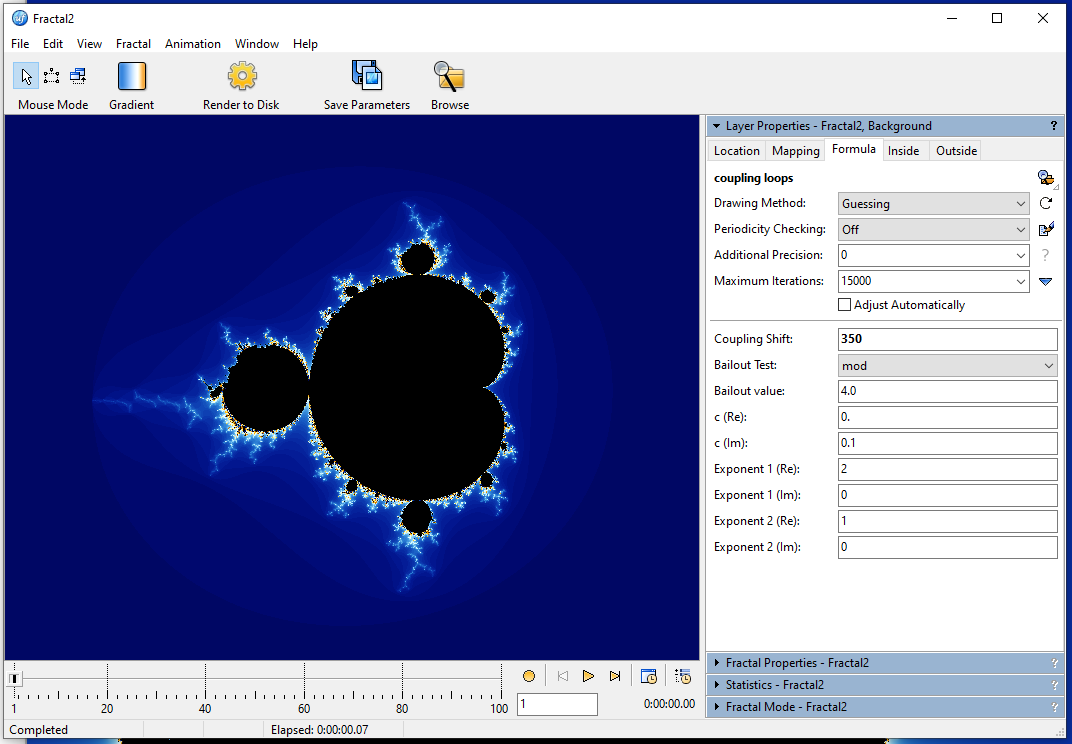 This image has 16 fractals arranged in a 4 by 4 array. All 16 have the same gradient and the same Formula tab (Julia from Standard.ufm). All of the Outside tabs use Plug-in Coloring (Gradient) from Standard.ucl, and the Distance Coloring plug-in from jlb.ulb. The di 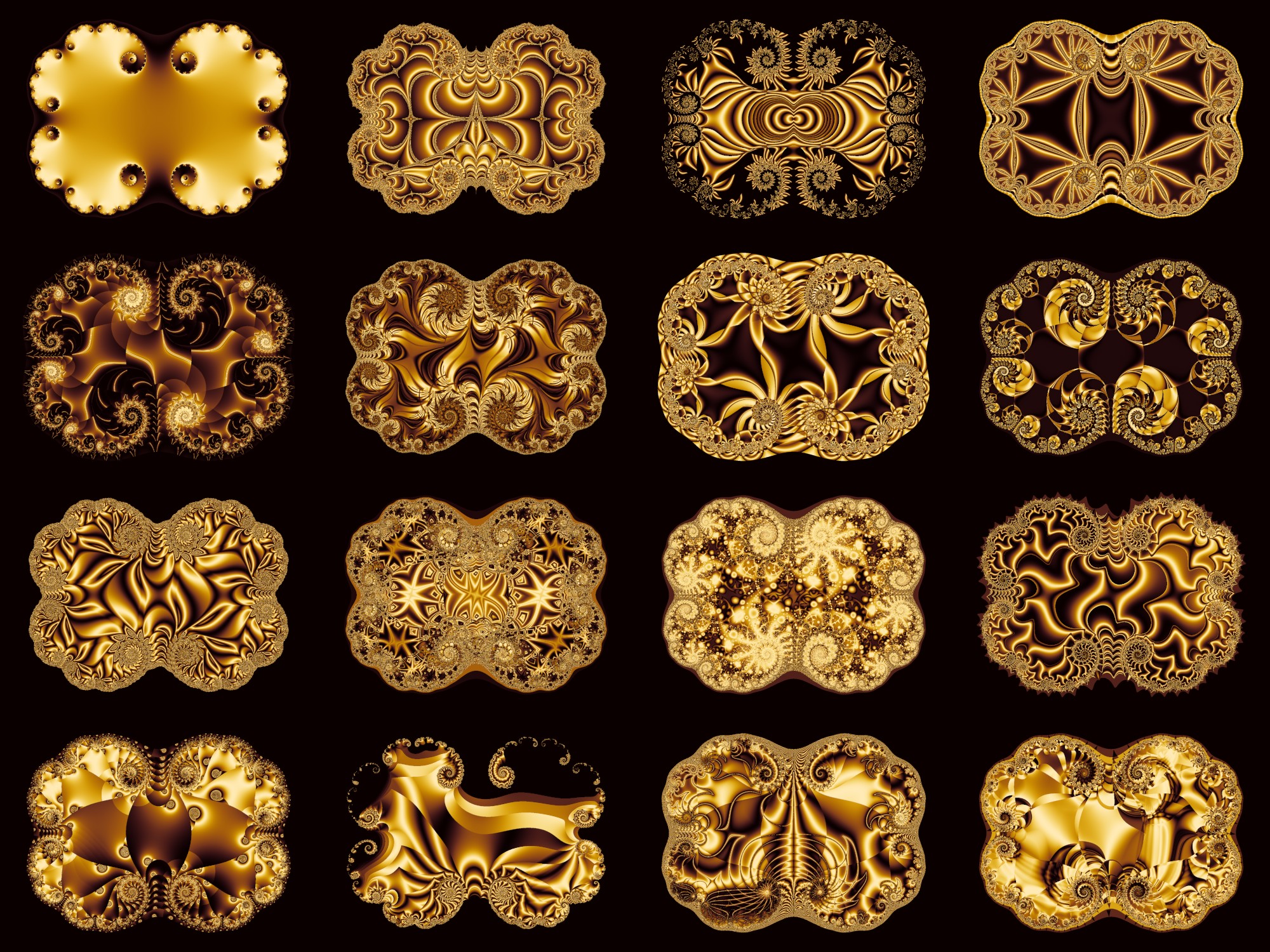 New distance plug-ins:
Gaussian Integer, similar to the coloring in Standard.ucl. This often gives interesting results when used only on early iterations.
Triangle, like Circles or Square, color according to whether z is inside or outside. 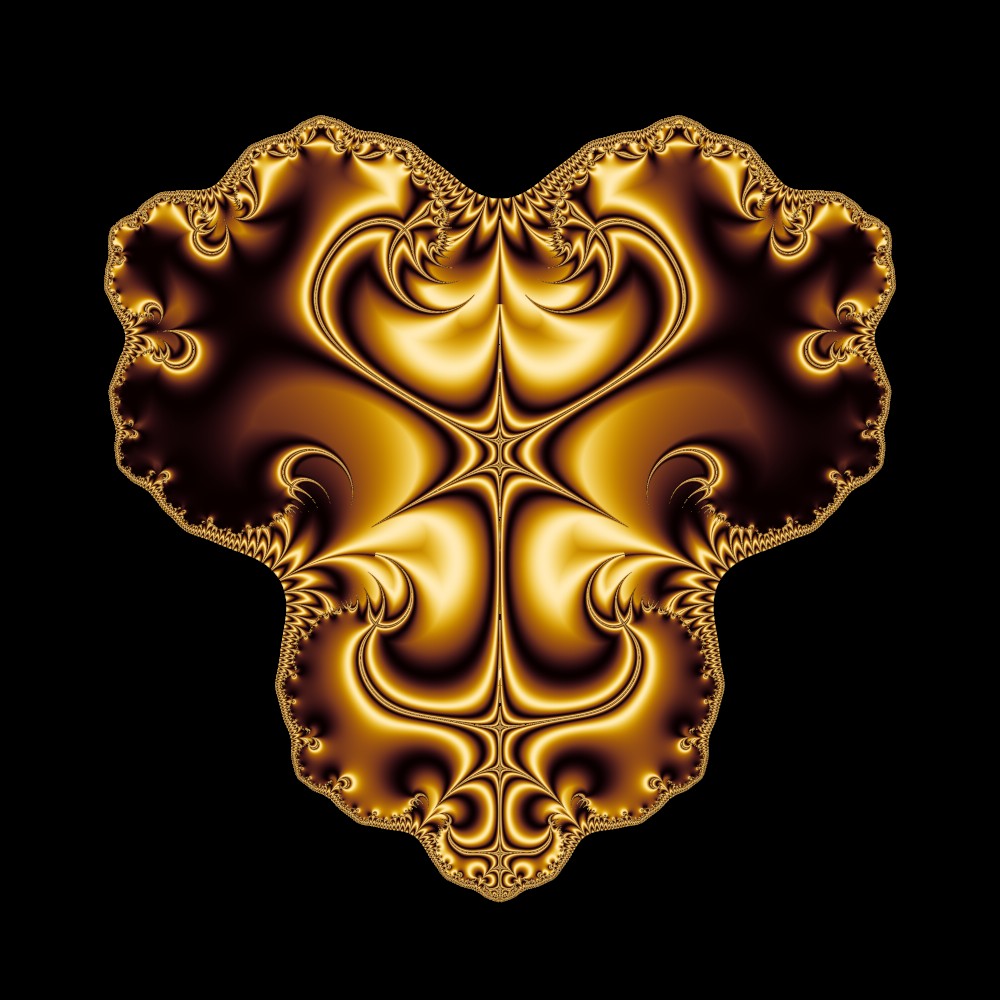 grfractals posted Jul 24 '21 at 3:51 pm
help for flawless rendering
Hello, i'm a uf6 apprentice and I have a question.

I'm testing and studying Kerry Michell tutorials
As you can see, my image is not as perfect as the image obtained http://www.kerrymitchellart.com/tutorials/basket/basket.html

I have made a copy and pasted of the upr of kerry and I have rendered, then I have compared both images and mine imge has defects. because?

physicist posted Aug 12 '21 at 8:50 pm
New coloring plug-in formulas
I have uploaded new Distance Coloring plug-in files to jlb.ulb. These are similar in concept to Orbit Traps: for each iteration, as the z associated with a pixel moves in the complex plane, information can be accumulated about distances. Afterwards this information is used to calculate an index into the gradient for coloring. See a sample image and a upr in the following post.
Load the upr in
read more
read more
3replies
101views
recent by Frederik Slijkerman  ·  Aug 16 '21 at 7:22 pm

physicist posted Nov 11 '20 at 12:03 am
New Cells part 2
Now two examples with just two layers, a top layer for the lines and a bottom layer to color the cells. Here’s one with 200 rectangles. Because cells are colored with index equal to n/Nmax, shuffling the colors often gives a more pleasing result.
alt="5fab29ce64b66.jpg">
200Rectangles {
::fPzc0hn2tT1yutNMQw7Gw/DE6udkYEtiTBPU72EgAHggkDJ9UAj0KLmQRKQRna/33VP8jaJn
2zt5m0s7O7SyZ 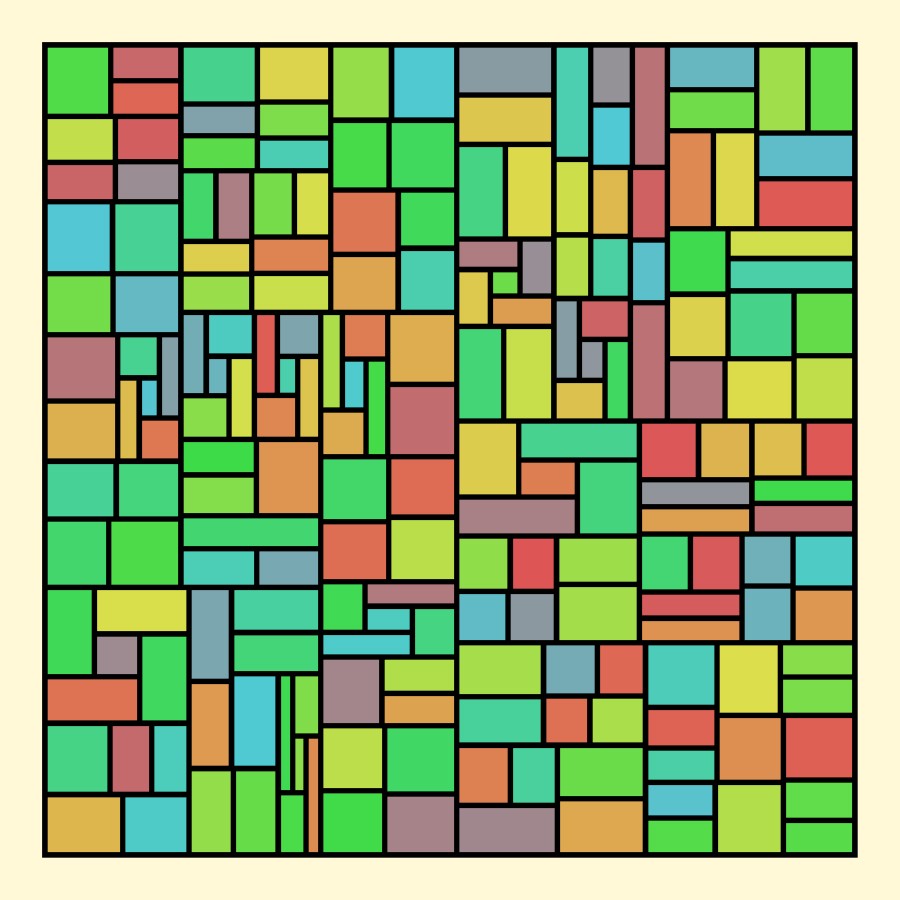 physicist posted Nov 11 '20 at 12:00 am
New Cells formula
Years ago, rkb.ulb included code that allowed the making of Mondrian-type images, but it is no longer in that file. I thought about this for a long time and decided to develop such code, though mine is totally different. (The rkb code used Trap Shape, and mine is entirely in the outside coloring.) Here’s an example of the result. Not as good as Mondrian’s, but reminiscent. And not at

Eduardo_B posted Aug 5 '20 at 11:46 pm
What style is this fractal and how would I go about creating this
I've been a longtime user of Photoshop and other graphics applications, but not spent much time creating fractals. I've looked at hundreds of fractals and there is one style in particular I really like and would be happy to create in a variety of ways. I think it's referred to as chaotic bundle or chaotic thread, but I may be mistaken regarding this. What I need help with is the steps in UF to cr 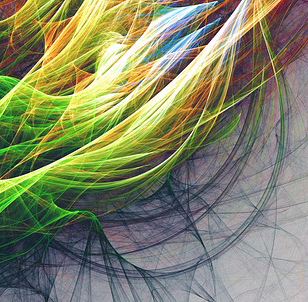 physicist posted Aug 13 '19 at 3:48 pm
New switching formula part 2
Switching the order of the two formulas, changing the parameters a bit, and switching to Mandelbrot mode, gives a fractal with some convergent and some divergent areas.

physicist posted Aug 13 '19 at 3:56 pm
New switching formula part 4
The second type of plug-in is “Combo.” It allows combinations such as (f1+f2)/f3 or f1(f2)). The latter means evaluate f2 to get a new value, then use that value as input to f1. The following example starts with Perlin 3D noise, followed by repeats of a Combo of Mandelbrot, Mandelbar, and Function.

physicist posted Aug 13 '19 at 3:51 pm
New switching formula part 3
The available formulas, all in jlb.ulb, are listed below. All of them have parameters that can be changed and hints that describe the options.

physicist posted Aug 13 '19 at 3:43 pm
New switching formula part 1
I have just uploaded Simple Switch Formula to jlb.ufm. By default it calls my SwitchCombo plugin in the new library, jlb.ulb. This allows generating new combinations of formulas; all of them allow switching from Mandelbrot-type mode to Julia-type mode or vice versa with the F7 key or pressing the Switch Mode icon on the toobar. Both divergent and convergent formulas, or some of each, can be used.
read more
read more
0replies
59views

I’ve been doing some readings about plugins and this is my interpretation of what I’ve read.

In the computer world, a plugin is a program that adds functionality to a larger program. In the context of UF, plugins add functionality to UF but are customized for particular formulas, algorithms, or transformations.

Thus, it follows that one

To create a fractal image one could understand the relevant math (i.e., Fractal Geometry) and the functionality of the software that generates the image. The relevant math is beyond the grasp of most artists and the functionality of complex software such as Ultra Fractal is, at least initially, also beyond the grasp of most artists.

As an alternative, one could ignore the math and id

I understand, maybe incorrectly, that a fractal image is (1) a set of numbers, generated by a formula, and displayed as POINTS, and (2) rules for coloring the POINTS.

In UF, is there a way for replacing the POINTS with SHAPES (e.g., a triangle)?

To begin a fractal, what parameters should I use in the “Fractal Properties: Image”?

Or, does it matter? If UF files are scalable like SVG files, then only the width/height proportions matter.

I am posting this query as an image to bypass the Spam Checker, which keeps rejecting it.
Thank you!

Out of curiosity, how often do you use the Switch Mode?

I can see myself using the Select Mode often; not so the Switch Mode.

As I stated in a prior post, before jumping into more advanced topics such as Layers and Transformations, I am in the process of developing a simple routine for creating new fractals. After choosing a fractal formula (I have already downloaded the Public Formulas), I am now re